Baby Maybe will not be shipping orders on Dec 24, Dec 25, Dec 31, or Jan 1. Digital orders will continue to be fulfilled instantly. Thank you! 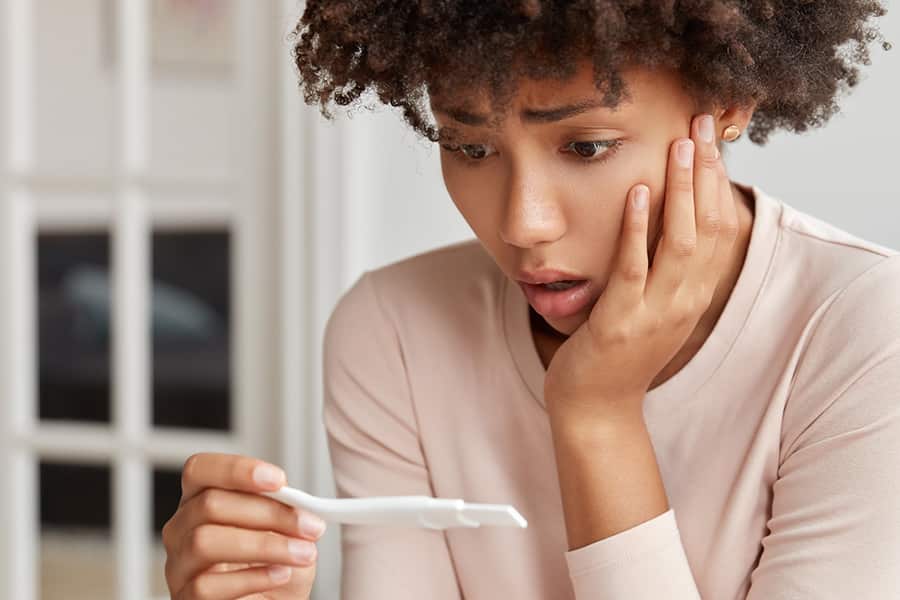 For a woman of childbearing age, the “Fertile Window” is one week during every cycle when sex can result in pregnancy.  It starts a little before the  release of an egg from the ovary and lasts up to a week, covering the time when the viable egg is traveling to the womb.  If unprotected sex occurs and sperm encounter the egg on its journey, the egg can be fertilized.

The fertilization of an ovum, or egg, by a sperm results in changes in a woman’s menstrual cycle, causing her period to be “late.”  This late period may be the first sign that the woman is pregnant.  This happens around the six week mark from the last period and is the earliest point where the pregnancy can be confirmed.  It is often referred to as the six week pregnancy.  Other signs and symptoms of pregnancy soon follow, but it is her late period that most often causes the woman to suspect that she is pregnant.

Here is an example to help you understand dates and your fertility with an emphasis on the potential for pregnancy following unprotected sex.  These dates are examples or estimates, they are not precise.

The fertile days are from a short period before ovulation and up to a few days after.  Once the sperm are in the reproductive tract, they can survive up to three (3) days awaiting the release of the egg and the egg is viable for a few days after its release.  Generally, the egg is fertilized within 12 – 24 hours after release.

If pregnancy does not occur the expected onset of the next period of a 28-day cycle would be August 29.

Using this example once the anticipated period does not occur, there is a six week pregnancy.

The Fake Pregnancy Papers provided by Babymaybeshop.com can be customized to show a level of HCG that is consistent with the expected range at 6 weeks gestation.

Why get an ultrasound at 6 weeks gestation?

What will you likely see in a 6-week ultrasound?

If you are fortunate, you may get to see the flicker of a tiny heartbeat as early as your first ultrasound at the six week pregnancy!  But, don’t worry, if the sonographer conducting the test cannot show it to you or see it.  While it is really exciting to see the beating of the heart, it is more common for the heartbeat to be seen at 6 weeks or later.

What if nothing shows up on the ultrasound?

Patience is key during pregnancy. Some women may go in for an ultrasound of the six week pregnancy only to hear that the gestational sac isn’t showing up yet.  There are a number of reasons for the absence of the yolk sac.

You may have counted the days incorrectly if the gestational sac is not seen.  If you are not at the six week pregnancy stage or later, you may not see the sac.

The presence or absence of the sac and related tissues, the size and structure of the sac, and the location of the sac are all useful in dating the pregnancy.

An ectopic pregnancy happens when a fertilized egg implants and grows outside the main cavity of the uterus.

An ectopic pregnancy would not show any signs of an intrauterine pregnancy since most occur in a fallopian tube.  Sometimes the fertilized egg falls out of the tube into the abdominal cavity where it can connect to other kinds of tissue. Though rare, some embryos are able to survive for a period of time outside of the uterus. When this occurs it is a medical emergency.

This is a less common finding than “wrong dates.”

A miscarriage happens when a fertilized egg does not properly form an embryo or implant in the lining of the uterus properly causing the fertilized egg and related tissues to be lost.

Vaginal bleeding after a pregnancy has been established and documented may be a medical emergency!  See your doctor if you have questions or concerns about vaginal bleeding or miscarriage.

Inability to find a gestational sac on the ultrasound and HCG levels that are lower than those on the last exam point to the possibility of an early miscarriage.

This information is presented to be a general guide to the events surrounding a normal uterine six week pregnancy, the time when you may first become aware of your condition.  It is for informational purposes only.  The information provided is not intended to be the only information available concerning early pregnancy or expected to be a substitute for professional guidance or the advice of your physician or health care provider.

If you have any concerns, questions, apprehensions, unease, or worry about a suspected pregnancy contact your health care provider immediately.

THE PARTIES AGREE THAT ANY PRODUCT PURCHASED ON THE BABY MAYBE WEBSITE SHALL NOT BE USED FOR ANY PROPOSE OTHER THAN AS A PRANK. WITHOUT EXCEPTION NO BABY MAYBE PRODUCT SHALL BE PROVIDED/SUBMITTED TO ANY GOVERNMENTAL OR OTHER AGENCY, MEDICAL DOCTOR, ARBITER OF A DISPUTE, AS PROOF OF PREGNANCY, PAST OR CURRENT, OR TO CLAIM ANY BENEFIT FOR WHICH A PREGNANT WOMAN MAY BE ELIGIBLE, OR ENTITLED TO RECEIVE, BASED ON HER BEING PREGNANT. NO HIPAA PROTECTED PATIENT HEALTH INFORMATION CONNECTED TO ANY BABY MAYBE PRODUCT, IS INTENDED, OR CONVEYED, WITH RESPECT TO THIS SALE.

I Understand
We use cookies to ensure that we give you the best experience on our website. By using Baby Maybe, you accept our use of cookies.OkPrivacy policy